Don't let fear drive the bus. It can ride in the back seat, but definitely don't let it touch the radio"

Originally from the U.S., Senior teacher Valerie McCann has had a long career as a Bikram teacher and competitor, primarily based in Los Angeles. She began practicing Bikram yoga daily in 2005 and attended teacher training in 2009. Valerie has studied with the most senior teachers and seminar leaders of the Bikram world for a number of years, including Mary Jarvis, Rajashree Choudhury, Craig Villani and the late Jason Winn. In 2017 she completed a 300-hour advanced teacher training. Valerie has represented California and the U.K. in national and international yoga competitions. She was semi-finalist in the 2012/2013 World championships.

As a dancer and athlete, Valerie is no stranger to injuries. Yoga helped her prepare for and recover from spinal fusion and bi-lateral hip replacement surgeries. She practices daily to keep her body functioning at the highest level. Known as a precision-focused instructor with an emphasis on therapeutics, she believes it is never too late to tap into your body’s innate healing potential. 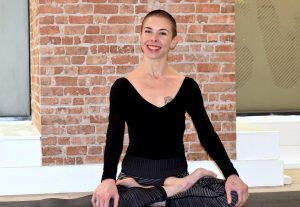 Outside the yoga world, Valerie is a performing artist and embodied practitioner who has also worked as an assistant director, movement and voice coach, and choreographer. In the last 15 years, she has collaborated with artists and ensembles across the United States and Europe. She is currently pursuing an MFA in Movement Direction/Teaching at the Royal Central School of Speech and Drama in London. Come and try her amazing class and you’ll be in for a treat. View her performance at the World Championships here: Yoga World Championships 2013

Favourite pose?
I think the 4 spine strengthening postures are the real magic of this series.
Favourite cocktail?
Fortaleza Reposado neat, no training wheels.
Slogan for life?
Don't let fear drive the bus. It can ride in the back seat, but definitely don't let it touch the radio!!!
Favourite food?
#peanutbuttereverydamnday
Favourite place?
Sebago lake in Maine
Favourite TV show?
I May Destroy You really blew me away. Wow. I also loved Sons of Anarchy - reminds me of Shakespeare/Greek Tragedy.
Favourite film?
It's a toss-up between The Apartment and All That Jazz.
Favourite Music
I love all styles of music, but 90's hip hop / r&b always gets me going.
Favourite thing to do?
Anything involving movement! I am currently doing an MFA in Movement Direction/Teaching at The Royal Central School of Speech and Drama. I can really nerd out on embodied practice and physical culture.
LOVE BYL because...
The discipline, care and willingness to try that each student brings to the room.